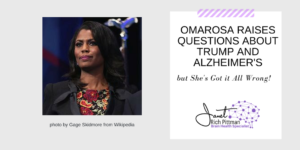 Omarosa Manigault Newman claims in her new book “Unhinged” that changes in President Trump’s actions stem from his mental decline which is leading to dementia, specifically Alzheimer’s.

As highlighted in the August 14, 2018 issue of Quartz Magazine she points out 4 examples – each of which don’t have scientific backing.  I say that as a brain health specialist and dementia practitioner, a former dementia healthcare administrator, who has spent years studying the brain and causes of dementia.

It is not mental decline Omarosa is describing, it is change in mental direction, actually mental enhancement, specifically mental perspicacity.

Continual lack of instant recall, based on ill cognitive reasoning, is a precursor to dementia.  Of the 50 to 100 people the president of the US has to meet on a daily basis, as well as the dozens of issues needing attention, it is common and understandable to only remember that person who is most important to the situation at hand and the situation that calls for immediate priority.

It’s the same with memory.  Trying to stuff one more item for recall into the president’s brain holding quadrillions of facts is daunting. He is only going to immediately remember that which is most important.

Psychologist Dr. George Miller gave us the Miller Law in 1956 which holds professional acuity, to this day.  His law states the average person can only remember 7 items at once. [i]   Dr. Nelson Conway, a working memory specialist and director of the working memory laboratory at the University of Missouri says ability to remember boils down to cognitive ability combined with the amount of information to retain; for most us, we can only recall 3-5 items at a time, an average of 4 items[ii].

“…reliance on notes in public speeches”

You’d be hard pressed to find a public speaker who doesn’t rely on notes or a teleprompter for their speeches. Anyone who has to deliver a speech every day, sometimes two to three a day, under the weight of being the leader of the world, would have trouble remembering what to say and scrounge for notes, especially if giving different speeches. If someone is truly suffering from dementia they may forget the purpose for their speaking engagement and could appear rattled and confused. Additionally, reference Miller’s Law.

“His father was diagnosed with Alzheimer’s…family history, heredity are the most important factors for determining if you will get the disease.”

According to Dr. David Perlmutter, author of various books on the brain, Grain Brain, Brain Maker and The Better Brain, genes are “a predisposition, not a determinant, meaning that while some people have a higher risk for Alzheimer’s by virtue of their genetics, that isn’t written in stone”.   Dr. Mark Hyman, author of The Ultra Mind Solution, also notes, “our genes do not dictate our destiny”.

Our surroundings and our lifestyle turn on or turn off our genes.

“He’s paranoid and irritable, anything could trigger fits of rage.”

If someone has always been typically sweet yet on a consistent basis becomes very angry and mean, this could be an early sign of dementia. Yes, severe behavior and personality changes are key components of cognitive impairment.  And that is just it, Trump has always been demanding and short-tempered, key personality traits the public has been aware of since following his life’s accomplishments prior to his candidacy as well as the presidency.

Omarosa Manigault Newman raises the question if Alzheimer’s disease is present in Trump.  To date, a true diagnosis of Alzheimer’s disease can only be made post mortem.  The average viewer can attest, the president’s job is mentally demanding, taxing and trying.  Whether you like him or not, President’s Trump discernment and shrewdness in managing our nation, not Alzheimer’s or dementia, shine through his actions.

Giving the counter measure from an experienced expert, I treat you to a fair and balanced view,

[i] “The Magical Number Seven, Plus or Minus Two: Some Limits on Our Capacity for Processing Information“[1] is one of the most highly cited papers in psychology.[2][3][4] It was published in 1956 in Psychological Review by the cognitive psychologist George A. Miller of Princeton University‘s Department of Psychology. It is often interpreted to argue that the number of objects an average human can hold in working memory is 7 ± 2. This is frequently referred to as Miller’s law. 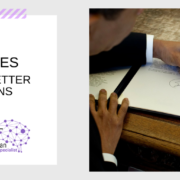 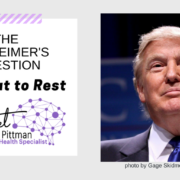 President Trump, to quell the Alzheimer’s questions, here is what to do: 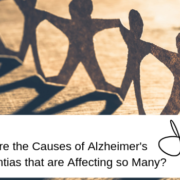 Why Our Parents and Grandparents are Coming Down with Alzheimer’s (and other dementias too) Will We Be NEXT?

How to Keep Our Brains Young
3 replies

President Trump, to quell the Alzheimer’s questions, here is what to do:
Scroll to top