This is Post 2 of your Breakfast Brain Food Series 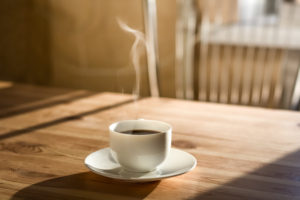 While many studies on mice and rats suggest that caffeinated coffee protects against Alzheimer’s Disease, direct human evidence for such was lacking, until now.  Sixteen professional constituents from the University of South Florida in Tampa and the Mt. Sinai Medical Center, Miami, The Univeristy of South Florida and University of Miami, reported their findings in the Journal of Alzheimer’s Disease.  Two combined studies of 124 total individuals, age 65 to 88 years old, were mentally tested and had blood samples taken prior to the study.  The subjects were then monitored over a 2 to 4 year period to determine the extent caffeinated coffee played in their mental capabilities.  Less mental decline was associated with subjects who consistently drank coffee and subjects with higher blood caffeine levels avoided onset of Alzheimer’s Disease

The research group took their finding and analyzed their ‘human’ results with results of other rodent Alzheimer’s studies.  All but one rodent comparison study gave equal results.  During this non matching study, twice weekly or every 72 hours to be exact, one set of mice with Alzheimer’s Disease (AD) were given caffeinated coffee, another set of AD mice were given decaffeinated coffee and the third set of AD mice were simply given raw caffeine.  Only the mice with caffeinated coffee showed severe memory improvements.

Thus the indication: some ‘as of yet unidentified’ component of coffee synergizes with caffeine to greatly enhance certain protein production.  Catch One:  drink caffeinated coffee.

Dr. Chuanhai Cao, a neuroscientist at the USF College of Pharmacy and the USF Health Byrd Alzheimer’s Center and Research Institute who lead the study, said that older adults with mild cognitive impairment who drink coffee “will not convert to Alzheimer’s.  The results from this (human) study, along with our earlier studies in Alzheimer’s mice, are very consistent in indicating that moderate daily caffeine/coffee intake throughout adulthood should appreciably protect against Alzheimer’s disease later in life.”

These tests provide direct evidence in humans that caffeinated coffee is associated with the reduce risk and /or delay onset of dementia and MCI (Mild Cognitive Impairment).

Catch 2:  the study reveals that less mental decline was associated with both men and women drinking 2 to 3 or more cups of coffee per day.  Since dementia begins to formulate in our brains ten to twenty years prior to symptoms of cognitive impairment occur, intervention to prevent MCI furthering into Alzheimer’s should begin early.

“Moderate daily consumption of caffeinated coffee appears to be the best dietary option for long-term protection against Alzheimer’s memory loss, “ says study co-author Dr. Gary Arendash.  “Coffee is inexpensive, readily available, easily gets into the brain and (when consumed early in the day) has few side-effects for most of us.  Moreover, our studies show that caffeine and coffee appear to directly attack the Alzheimer’s Disease process.”

There is hope so, ready for a cup?

From now on…Blueberries for breakfast.