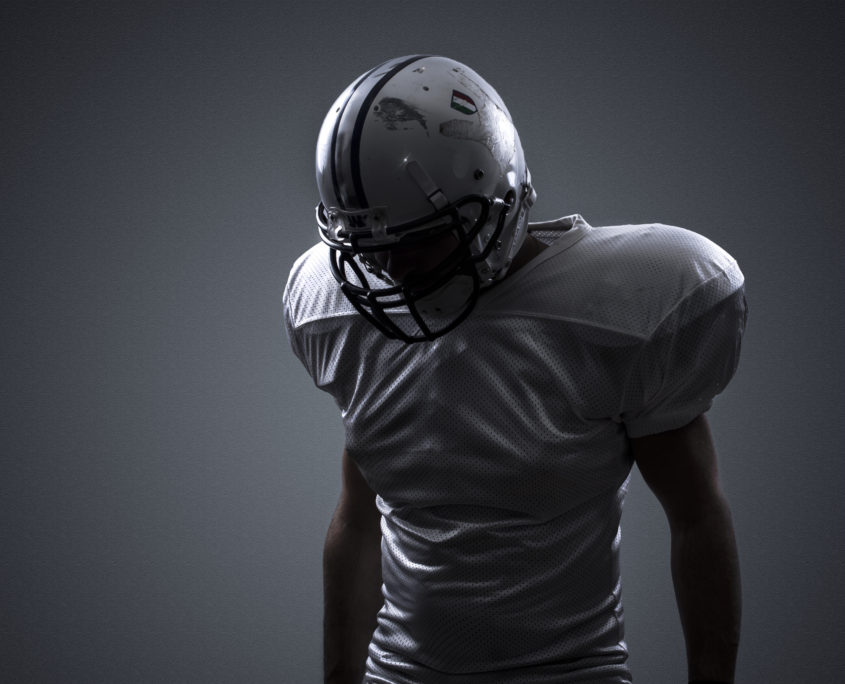 Football season comes in the fall but if you’ve got a fan or player in your household, there is no season, your life revolves around it. Many topics, concerns and issues about football ring through the year: weight, competition, strength, workouts, clothes, shoes, hygiene, schedule, travel arrangements, the list goes on and on.  But the main thought that is in everybody’s mind when football is a part of their life is CTE,  Regardless if you are a parent, other family member, or player yourself, the questions you hold deep inside are could CTE be brain lurking or maybe even percolating? Is it in my future?

What is CTE? Chronic Traumatic Encephalopathy
CTE is a broad term for referring to a type of dementia where continual blows to the brain cause the brain’s tau protein, which lies parallel to a neuron, to shrivel up and misfold, then tangle up with other same proteins, killing the neuron, leading to progressive deterioration of the central nervous system. It is a form of dementia, and dementia is a type of disease resulting in large amount of brain cells dying causing the head brain to malfunction, destroying one’s cognition. In simple terms, a large hunk of brain cells die in certain area or areas of your brain where your thoughts, conscious and/or unconscious, cannot travel through that area, consequently your brain cannot function.  Once this dying starts, unless you put a stop to it and grow back your brain cells and reorganize your brain cells, your body shuts down and you eventually die–EARLY, most probably before your time but WITHOUT your mind at it’s full and complete function.
A study released from the Boston Brain Bank confirms CTE in 110 of the 111 brains of former NFL players that were examined. Of the total 202 deceased football players, researchers found CTE in 99% of brains obtained from NFL players, 91% in college football players and 21% in high school football players.
The Executive Director, Dr. Ann McKee, of Boston University’s Chronic Traumatic Encephalopathy Center, host of the Boston Brain Bank states “It is no longer debatable whether or not there is a problem in football—there is a problem”.
After a brain injury (injuries) from CTE, we can’t just snap our fingers and grow our brain back to normalcy, the cure is prevention, the cure is not to injure the brain. But football is not going away and we have to take steps to strengthen our brain and fight CTE, eventually beat it, get back to normalcy as quickly as possible.
Has it been done? We are just learning of CTE, knowing it is a form of dementia, again where a large amount of brain cells have died or are dying. We have been able to reverse dementia so until further research is done where we know more about CTE, let us look at how we have reversed other types of dementia and copy the success from that playbook.
Initially, here are 3 Ways to Fight CTE.  The concept is to put neuroplasticity on hyper drive, in other words build a larger, thicker than normal web of brain neurons and neuron connecting cells so to strengthen our central nervous system. Neruoplasticity is the growth of new brain cells.  Football payers make their bodies as strong and tough as humanly possible, we must do the same for our brain. We must grow and strengthen our brain generating neuroplasticity, by
1.  Creating new neurons
This is mainly accomplished by conducting heavy aerobic exercise 6 days a week (for the REST of your life).
2.  Connecting the neurons
Once connected, baby neurons must be connected to older ones else they too shrivel and die.  The way to connect them is through heavy brain exercising
which is having mental accomplishments (Seduko only goes so far, a second or third career is optimal, highshoolers and colligians—you better be on the honor roll, every quarter!)
3.  Supporting the neurons.
Support means feeding and energizing the cells that connect the neurons as
well as direct and guide the neurons. Here are 4 ways/ measures of  maintenance for these supporting cells.
As a former Dementia Health Care Administrator and Dementia Practitioner, I now counsel one-on-one for dementia prevention and dementia REVERSAL and speak and write on successful aging and ways to have good brain health.
An employee and deceased cousin, both former NFL players with CTE, and a nephew who got through 6 years of JV and varsity high school football (brain successfully I pray), have prompted me to side step dementia as a middle age/senior/elder issue and get the word out on how to fight and hopefully beat CTE affecting those much younger.
Spread the word.  Here’s to ALL our good brain health,

JANET RICH PITTMAN, SCALA, CDP
Dementia Practitioner for Dementia Prevention and Dementia REVERSAL!
Brain Health Specialist
As a former health care administrator and practitioner, specializing in dementia, Janet Rich Pittman has been at the bedside of your family member or someone else close to you, holding their hand and trying to caress cognition back into place. Janet has repeatedly watched western medicine fail families and patients.
Scientifically trained researchers and doctors using unconventional medicine and means have reversed Alzheimer’s Disease and other dementias. Their astonishing results are revolutionizing the way we look at, and effectively treat this debilitating disease.
Janet has borrowed from their methodology and offers hope to those interested in discovering non-conventional, but proven methods to reclaim memory and cognizance.
One way of teaching others how to get their memory and cognizance back and keep it, specifically by having good brain health, Janet started The Brain Health Revolution (join here for free: www.JanetRichPittman.com) where she disseminates good brain health information, showing us all how to keep our memory and age successfully…with no dementia.
As a Brain Health Specialist, she counsels many one on one, is the author of On The Brain blog and 9 Signs You’re Experiencing Brain Drain and How to Keep Your Brain Fully Charged,  (electronic copy free), is a syndicated magazine columnist of The Senior Scene for CF Magazine and is a regular radio and podcast commentator.
Website: www.JanetRichPittman.com
National Talk Show Recordings
Blog: On The Brain
Monthly Column The Senior Scene for CF Magazine
Linked In
FaceBook
You Tube Videos
SoundCloud
Brain Fog? Your brain is just ‘off’? It’s really your gut.  Learn more about our gut brain in an article I wrote here.
https://janetrichpittman.com/wp-content/uploads/2017/08/iStock-173667316.jpg 2578 3863 Janet Rich Pittman, SCALA, CDP, MCWC https://janetrichpittman.com/wp-content/uploads/2021/08/JanetRichPittman-Web-Header-01-1030x178.jpg Janet Rich Pittman, SCALA, CDP, MCWC2017-08-10 15:44:572019-06-27 12:04:213 Ways to Beat CTE
Specifics on Preventing Dementia

Brain note to the Tax Man…
Scroll to top